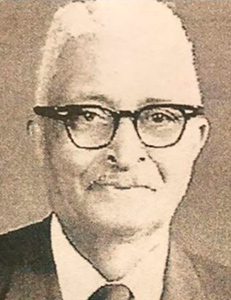 John Luke Brooks was born to Lee and Laura Brooks on January 15, 1896, in Franklinton, North Carolina – one of seventeen children. He received his early education in Franklin County, in the Concord School and the Baptist Training School. He attended Shaw University in Raleigh, North Carolina.

In 1918 he entered the U.S. Army where he served during World War I, and was honorably discharged after the Armistice. On October 31, 1919, he married Laura B. Brooks, and they remained constant companions for 59 years until she passed in 1979. After marrying, they lived in various places, including Washington, D.C., and Mount Pleasant, Pennsylvania. While living in the District of Columbia, he worked for the F. D. Moses Construction Company. In Mt. Pleasant, Pennsylvania, he worked in the steel mills. Later they settled in Lorain, Ohio.

He was always active in church, and at an early age he became a member of the Manassas Chapel, a Baptist church in Franklinton. On August 11, 1936, at the age of 40, he accepted the full truth of the Word of God and was baptized in the name of the Lord Jesus Christ at The Way of the Cross Church of Christ in the District of Columbia. Soon he professed receiving the gift of the Holy Ghost, and shortly thereafter God’s call into the ministry.

He began a ministry in Lorain, Ohio, in October of 1937. In Julie 1938, he was ordained. After spending eight years in Lorain, he accepted a charge at the Ransom Way of the Cross Church and returned to his hometown, where he remained for twenty-two years. In August 1960, he was consecrated a Bishop of the church, and upon the death of H. C. Brooks in 1967, became the Presiding Bishop of The Way of the Cross Church of Christ. In September 1968, he became Pastor of the mother church in Washington, D. D., and remained there until he retired ten years later.

After retiring, he and his beloved Laura returned to North Carolina where he took care of her until she passed in 1979. During this time, he also spent time traveling, fulfilling his role as overseer of the general organization.

Several important things were accomplished during his tenure as Presiding Bishop including the issuance of a proclamation declaring the last week in February to be Founders week throughout The Way of the Cross Church of Christ, International, stating that appropriate celebrations should be held each year in each church to commemorate the occasion. He also established the Board of Bishops and the Pastoral Council. One of his proudest accomplishments was the establishment of an affiliation with the body of churches in Ghana, West Africa.