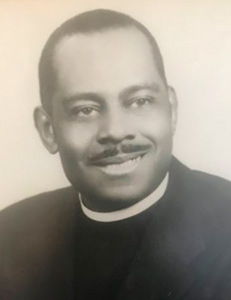 Henry Chauncey Brooks was born on July 17th, 1896 in Franklinton, NC to Robert and Frances Brooks.  After the untimely death of his father, he moved to Washington, DC in 1912 at the age of 16 with his sister Leora Hamilton.  Unbeknownst to him, the move to Washington would be the road the Lord planned for his salvation.

In 1917, he entered the military serving in World War I in the United States Navy.  After an honorable discharge in 1919, he returned to Kittrell, NC to marry his fiancée of two years, Willie Shaw Dunston on Christmas Day.  From this union, they were blessed with twelve children;  Isabel B. Ford, John H. Brooks, Essie B. Lindsay, Ruth B. Lancaster, Joseph Brooks, Bertha B. Simon, Evelean Cook, Bernard Brooks, W. Romona Miller,  Naomi Postell, Olivia Brooks, and Alphonzo D. Brooks.

In 1925, there was a revival at 31st and H Street, NW Washington, DC which was conducted by Elder Robert Watts of the Church of Our Lord Jesus Christ. Bishop R. C. Lawson was the Presiding Bishop at that time.  Henry’s sister informed him of the revival and tried to instruct him on the baptism in Jesus Name. He did not accept her instruction and was determined to attend the revival to attack the preacher.  After studying the word, he and his niece Rose Belle Howard attended the service. When the preacher made the altar call, Henry put his hand up to ask a question.  However before he could speak, God took hold of his tongue.  The preacher asked him if he wanted to be saved, and he answered “yes”.  The preacher then asked, “When”? Henry answered, “Now”.  That night he was baptized in the name of Jesus.

Six months later he was called to preach.  Even though he had been baptized in the name of Jesus, he was still attending a Baptist Church. So, they eventually put him out.

In 1926, he started his first church named Emmanuel Tabernacle, which was located at 4th and W Street, NW Washington, DC.  After being there five months, he was informed that he had to leave because another church had purchased the building.  This caused the small congregation to be scattered.  For approximately three months he went without any accommodations.  He stored the church equipment in the home of Charles and Alice Johnson, (his brother-in-law and Sister), at 3rd and Q Street, NW.  This is where the church reorganized.  The membership consisted of his wife, Willie Shaw Dunston Brooks, their three children at that time; (Isabel, John and Essie); Charles and Alice Johnson, Rose Belle Howard and Lovie Foster Brown.   On the night of February 28, 1927, the church was started; however the name was not given until they located the building at 2nd and P Street, NW.  The owner asked for what purpose they would be using the building, and Bishop Brooks answered, “A church”.  He asked Deacon Bruce for a name.  Deacon Bruce replied, “The Way of The Cross”.  Until that time, they had only been regarded as the Church of Christ.  Combined, we now have The Way of the Cross Church of Christ.

The Lord blessed tremendously, and in approximately one year, the building at 2nd and P Street, NW was filled to capacity.  As a result, they were required to find another place to worship.  They moved to 21st and M Street, NW.  This building had a seating capacity of 300. After seven years there, it was also filled to capacity. One of the charter members, Samuel M. Cole, told Bishop Brooks about a building at 4th and Virginia Avenue, SE Washington, DC.  Bishop Brooks and Elder Alexander R. Harris went to see the building.  As they sat in the 3rd bench in the middle aisle the Lord told Bishop Brooks to claim it.

At that time in Washington, DC, no other Pentecostal or Apostolic ministry worshipped in an actual church building.  Moreover in 1935, God blessed Bishop Brooks and the congregation to purchase the property.  The church remained there until 1963, when they were required to move due to the construction of the Interstate highway.

In need of a place to worship, by the leading of the Lord, Bishop Brooks found the building at 9th and D Street NE, Washington, DC.  He inquired of the current pastor if the building was for sale and was told that they had just completed $100,000 worth of renovations, so they had no intention of selling.  Bishop Brooks told the pastor that the Lord sent him there.  He contacted an agent and the next Sunday, The Way of the Cross Church of Christ membership worshipped in the building.  Today, we continue to worship in the same building.

Bishop was a man of great faith, who always sought the Lord in everything.

Bishop Henry Chauncey Brooks went on to be with the Lord on June 12th, 1967.