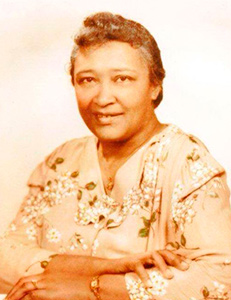 Mother Willie Brooks was a woman of quiet dignity. Besides being the wife of a very busy pastor, she raised a family of twelve children, managed a large household, and was very active in the church. In fact, she was one of the co-founders of The Way of the Cross Church of Christ in 1927.

She was born in North Carolina about eight miles from Kittrell on August 1, 1897, one of four brothers and two sisters. She and her two younger brothers walked two miles to the Concord Grade School every day. Willie’s parents were very strict and religious, and though they did not know about Holiness, they lived a holy lifestyle. Willie loved Sunday school and attended regularly. At the age of eleven she was baptized and joined the Baptist Church. She had to walk two miles to church, but very seldom missed going on Sunday. On two separate occasions she was appointed delegate to the state Baptist Sunday School Convention.

Mother Willie met Henry C. Brooks one day while visiting a cousin. Six months later, he enlisted in the United States Navy. Before leaving, he asked her to marry him. She accepted his proposal, and they became engaged. Two years later when he was discharged, they were married. For two years, they lived on a farm in Franklinton, North Carolina. During that time they became the parents of a daughter, Isabell. About a year later, they moved to the District of Columbia.

Willie gladly accepted the way of Holiness when she heard about it, and soon afterward, the Lord called her husband into ministry. Through the years, she helped him in every way she could, despite the fact that being faithful in church required a lot of work and sacrifice. Mother Willie served the Lord with joy in her heart and was frequently heard to say that “Even if there were no hereafter, I would serve the Lord for the joy I get in this present life.” Her favorite song was “When He Calls Me, I Will Answer,” and she often quoted from Psalm 46:10 – “Be still and know that I am God.” She was a missionary, a fundraiser, a member of the pastor’s aid and floral clubs, a charter member of the women’s council, and a member of the helping hand auxiliary. She also made clothes for the needy and robes for the choirs.

In March of 1989, at ninety-one years of age, Mother Willie went home to be with the Lord. She was a beautiful example of a quiet, godly lady.